Home > Events > Heroines of the Holocaust: New Frameworks of Resistance 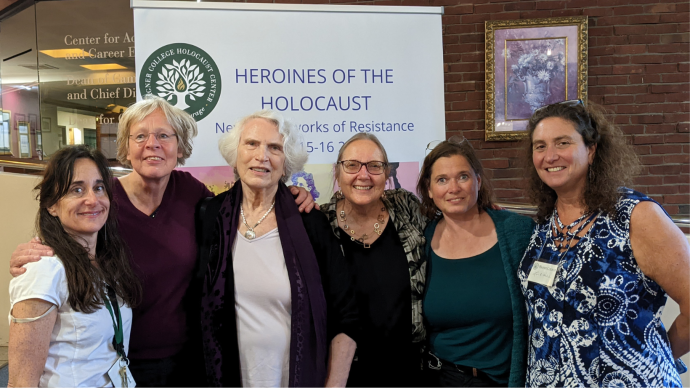 Remember the Women Institute was pleased to co-sponsor an important international symposium at Wagner College, Staten Island, NY, on June 15 – 16, 2022: “Heroines of the Holocaust – New Frameworks of Resistance.” We congratulate the co-chairs, Laura Morowitz and Lori Weintrob, for their initiative and for successfully presenting this event despite COVID restrictions and delays. We also commend Dan Glassman, who kept Zoom and other technical issues running smoothly. We are forever grateful to him for stepping in to help Remember the Women Institute when we needed help with our website. Ruth Kupperberg, symposium assistant, also helped in countless ways.

Perhaps a researcher, like a mother, shouldn’t have favorites. However, I admit I feel especially close to some of the women I have researched and written about. I want to tell you how these personal heroes illustrate diverse ways to resist. There are many other women whose heroism I could highlight, but I will briefly mention five whose actions have especially moved me. I never met any of them but I do know their families.

As my time is extremely short, I had planned to leave details about Hadassah Bimko Rosensaft to her son, Menachem Rosensaft. He was supposed to speak about her at the reception following this session, but had a family emergency. Her resistance was via her medical skill. A dental surgeon, she is credited with saving lives in Auschwitz-Birkenau and Bergen-Belsen, as well as after liberation.

Gemma La Guardia Gluck was the sister of New York City Mayor Fiorello La Guardia. In a story too long to go into, she and her brother were born in New York to Italian immigrants. Their mother was an Italian Jew. The family moved back to Italy after their father’s retirement, and Fiorello then returned to New York and built his political career. Gemma remained in Italy, married a Hungarian Jew, Herman Gluck, and they moved to Budapest and had two daughters. There she was caught up in the Holocaust and arrested in June 1944, not principally because she was Jewish but because she could be used as political hostage as La Guardia’s sister. The order came directly from Himmler and Eichmann. Gemma ended up in Ravensbrück at age 63, generally too old to survive. She taught the women in her block English and they called her Mutti. When she was released from the camp to be brought to Berlin as an exchange hostage in April 1945, she found out that her daughter and baby grandson, Richard, had also been held in Ravensbrück. By the time she and her family got to Berlin, the Russians had arrived. Gemma, now 64, took charge of herself, her daughter, and grandson, and did everything to keep them safe and prepare to get to the United States. Fiorello, by then the head of the UN Relief and Rehabilitation Administration, didn’t want to be accused of nepotism and didn’t let his family jump the immigration line. Instead, he sent them to relative safety in Copenhagen. They finally arrived in New York in May 1947, where she continued her role as a strong matriarch until her death in November 1962. Baby Richard survived until 2020, when he died of complications of COVID-19.

There are many levels and kinds of heroism, including just managing to stay alive in a concentration camp. But Haviva Reick was heroic in so many ways. Haviva Reick was murdered in Slovakia on November 20, 1944, age 30, after trying to rescue the remnant of the Slovakian Jewish community. As a young woman in Slovakia, she had been a respected leader of the Hashomer Hatzair socialist Zionist youth movement, and in late 1939, she immigrated to pre-Israel Palestine and become a founder of Kibbutz Maanit. Haviva became a member of the Palmach–the elite fighting force of the Hagana–and then was chosen to join the special parachutist mission of the British military. You all know the name of one of the other two women in the group, Hannah Szenes, and Haviva should be equally known. As a result of the uprising at the end of August 1944, Banská Bystrica, Haviva’s designated destination, was the center of free Slovakia.

Haviva accomplished a great deal in the two months and three days that she operated in Banská Bystrica. She immediately began to organize food and shelter for the Jewish refugees, and also carried out her mission to rescue Allied servicemen. The Nazis recaptured the territory of free Slovakia, entering Banská Bystrica on the evening of October 28. Haviva had a chance to leave on an Allied transport but declined. Instead, along with two male colleagues, she led a group of about forty members of Jewish youth movements and other community leaders to supposed safety in the nearby mountains on October 26. On October 30, the Nazis surprised the group by attacking from higher in the mountains, and some of the group, including the three parachutists, were captured and imprisoned. The three were wearing British uniforms and dog tags that identified them as Jewish. She was imprisoned and tortured by the Nazis in Banská Bystrica, and then shot in the back of the neck by Germans and Hlinka guards on November 20, 1944, and fell into a mass grave.

She is a Slovakian and Israeli hero, and also was one of only sixteen members of the British Women’s Auxiliary Air Force who also served with their SOE, Special Operations Executive. Haviva ultimately did find her final resting place in Israel, as she would have wished. When the bodies were exhumed from the mass grave after World War II, Haviva was identified by her British dog tag and then buried in a British military cemetery in Prague. In September 1952, her remains were brought to Israel and buried among the nation’s heroes on Mt. Herzl in Jerusalem.

I will be brief about my last two personal heroes, who performed cultural acts of resistance in Ravensbrück. Both were Jewish political prisoners at Ravensbrück, one German and one Austrian. Olga Benario Prestes was a German Jewish communist who had been sent to Brazil in 1934, age 26, by the Comintern to help Communist leader, Luis Prestes, foment a revolution against the dictator president, Getulio Vargas. Their November 1935 revolution failed, and they were captured and imprisoned in Rio de Janeiro. In the meantime, she and Prestes had fallen in love, and she was pregnant. Vargas managed to get her deported to Nazi Germany, and she gave birth in a Berlin prison. She was among the first political prisoners brought to Ravensbrück soon after it opened. Her baby daughter was rescued by an international campaign organized by her mother-in-law.

Käthe Leichter, who had Ph.D. magna cum laude in Social Sciences from the University of Heidelberg, was a Jewish Social Democrat in Vienna. She was arrested in May 1938, after her husband had fled the country with their two young sons. Like Olga, she did her utmost to keep up the spirits of the other women, and they sometimes even worked together despite ideological differences. There was a newspaper, a secret atlas, a clandestine play, and geography lessons. I learned about Käthe from her son Franz, my then New York State senator, when I was working in the Senate in the 1980s. Both of these brave young women were murdered by gas at the nearby Bernburg euthanasia facility in the winter of 1942, a fate shared by other Jewish political prisoners at Ravensbrück.

The Wagner College Holocaust Center was so proud to present our groundbreaking symposium, Heroines of the Holocaust: New Frameworks of Resistance. On June 14-16, 2022, we brought together 50 scholars in person and on Zoom, from seven different countries, to explore and establish a new narrative around female resistance and rescue during the Shoah and other genocides. Scholars, educators, artists, and first and second generation survivors shared their research and experience of courage, fortitude, and strategies of women who fought back in every manner possible. Throughout the symposium, leading senior scholars in the field alternated presentations with graduate students pioneering new approaches to the study of the Holocaust and female agency.

As co-organizer Laura Morowitz, with co-organizer and director of the WCHC, Lori Weintrob, noted in her opening remarks, “…women used every means available to resists and to rescue, from open defiance to subterfuge, as medical personnel, as teachers, as partisans, as couriers, as underground leaders, as bombers, as lawyers, as diplomats, as smugglers, as ordinary housewives, as letter writers, as students, as gun toting badasses. They plotted the resistance deep in the woods or at kitchen tables. Their acts of bravery were sometimes years in the making, and sometimes spontaneous, decided in the flicker of a second. They fought and they sacrificed their lives to save thousands, or sometimes to save a single newborn baby.”

The symposium kicked off with a screening of the award-winning film, Who Will Write our History (2018), on the Emmanuel Ringelblum archive, followed by a Q and A with director Roberta Grossman. Wednesday morning opened with a roundtable devoted to “A New Canon of Heroines.” Panels focused on “Female Solidarity” and “Public and Private Identities.” On Wednesday afternoon, participants ferried into New York City for a behind-the-scenes visit to the Museum of Jewish Heritage, followed by dinner in Manhattan. Back on the Wagner College campus, directors Martha Lubell and Barbara Attie answered questions and reflected on their film, Daring to Resist: Three Women Face the Holocaust, made over two decades ago, before the topic of female resistance had received wide coverage.

Thursday’s panels included topics such as “Medical and Legal Rescuers,” “Female Resistance Leaders,” “Women in Genocide,” “In the Lion’s Den,” “Women in the Camps,” and “Women in the Partisans.” An educator’s workshop was facilitated by Echoes and Reflections and the Jewish Partisan Educational Foundation. Keynote speaker, Judy Batalion, best-selling author of The Light of Days, answered questions about her work and inspiration. Dr. Bernard Schanzer and Henry Schanzer, Esq., rescued as eight year olds in the south of France by two courageous women, told their story and paid homage to these Righteous Among the Nations recipients during our luncheon. The roundtables concluded with one dedicated to forms of resistance: spiritual, cultural, psychological, and armed.

The final event of the symposium was a cocktail hour, with remarks by Consul Anton Klix of the New York branch of the Consulate General of the Federal Republic of Germany. Artist Linda Stein spoke to us about the inspiration for her tapestries, “Holocaust Heroes: Fierce Females,” seven of which were on display in our Union Gallery. Jay Saper and Corbin Allardice, Yiddish translators and poets, read some of the harrowing poetry of Lithuanian Holocaust survivor and partisan, Rikle Glezer. The symposium came to a moving end as three talented Wagner College students gave a beautiful rendition of The Partisan Song (Zog nit keynmol) and The Female Partisan Song (Shtil di Nacht), both written by Hirsch Glik, murdered by the Nazis at the age of 22.

“An important outcome of the symposium,” said Lori Weintrob, co-organizer and director of the WCHC, “is the effort to advance the goals of Holocaust education and its ongoing relevance to human rights struggles.” The symposium was made possible by the generous sponsorship of the Consulate General of the Federal Republic of Germany, the USC Dornsife Center for Advanced Genocide Research, the Fondation pour la Mémoire de la Shoah, and the Holocaust, Genocide, and Interfaith Education Center of Manhattan College, along with individual sponsors, Stephen Greenwald, Bernard and Henry Schanzer, and Fern Zagor. Additional supporters and information on individual participants and panels can be found on Wagner College Holocaust Center’s official website for the conference. 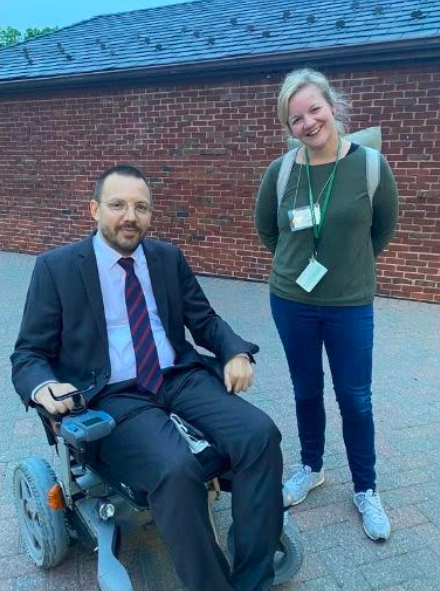 Photos are courtesy of the Wagner College Holocaust Center.