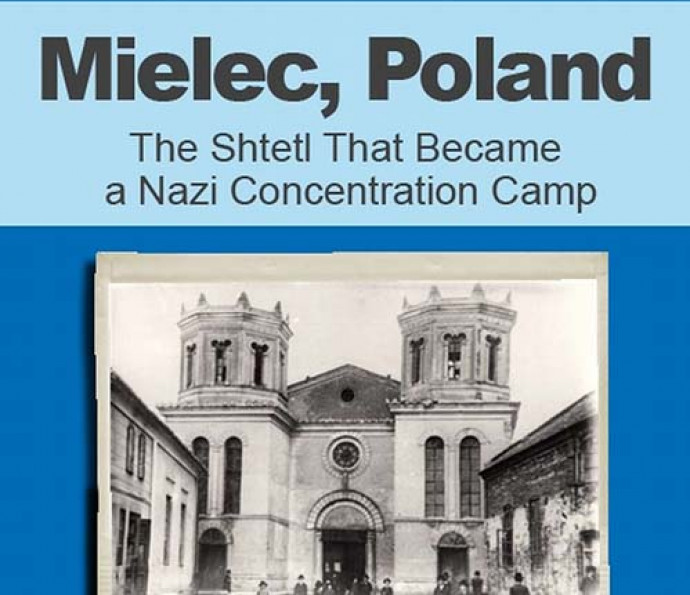 This unprecedented book about Mielec, Poland includes documentation about women’s experiences. The book’s 45 visuals include rare correspondence during the Holocaust between deported women and a non-Jewish neighbor in Mielec. There is also testimony about a sex slave of a Nazi, as well as that of one of the few women who survived the Sobibór revolt. Author Dr. Rochelle G. Saidel’s research was carried out as a Research Fellow at the Yad Vashem International Institute for Holocaust Research, as well as under the auspices of Remember the Women Institute.

Mielec, Poland, is just one of many small dots on the map of the Holocaust, but its remarkable and unique history calls for closer scrutiny. Using an experimental process that was not repeated, the Nazis destroyed the Mielec Jewish community on March 9, 1942. After murdering those deemed too old or disabled to be useful, the German occupiers selected able-bodied survivors (mostly men) for slave labor and then deported the rest (4,000 mostly women, some with children) to another sector of the Generalgouvernement, the Lublin district. This process was recorded not only by the Nazis, but also by some members of the local Jewish and non-Jewish population. The visual and written documentation in this book allows us to learn about the Jewish community that had flourished in Mielec until the Holocaust, as well as the unusual way in which it was wiped out by the Nazis. In addition, testimonies and war criminal trial records describe an almost unknown brutal slave labor camp that operated on the outskirts of Mielec from before March 1942 until July 1944.

Mielec is located in the Rzeszów province in southern Poland, quite close to Tarnów (and was in the Kraków district of the Generalgouvernement). Both the Jewish community and the concentration camp of Mielec have almost vanished from history, and evidence at the site is sparse. Nevertheless, what happened there can be recounted using old and new testimonies, rare photographs and documents, survivor interviews, and archival material. With the exception of a small number of people fortunate enough to survive by running and hiding, the entire population was murdered, sent to slave labor camps, or later deported to death camps from the Lublin district.

Mielec was the first town in the Generalgouvernement from which the entire Jewish population was deported in the context of the Final Solution. The Nazis’ well-documented decision to deport the Jews of Mielec was made very early, in January 1942. Furthermore, after deportation to the Lublin district following an Aktion on March 9, 1942, the Mielec Jews were not murdered immediately. They were allowed to live for months under terrible circumstances in some of the small towns in that district, near Sobibór and Belzec. Ultimately these two death camps would be the final destination for Mielec’s Jews.

Another unusual aspect of the Mielec story is the labor camp that was located there. The site of the Polish National Aircraft Company (PZL), part of a Centralny Okreg Przemyslowy (Central Industrial District), was taken over by the Nazis for the manufacture of Heinkel airplanes. Later this work camp became a concentration camp, complete with tattoos and sadistic commandants. Despite these facts, histories of the Holocaust rarely mention Mielec. Today, this site is a Euro-Park industrial complex.

The rare visuals about Mielec during the Holocaust are from survivor Moshe Borger (who was given a photograph album and correspondence by a Polish neighbor after World War II), from archives (the deportation), from research trips to Mielec, and from other survivors. Very early and much more recent survivor testimonies, as well as Nazi documentation, help to tell the story. The author interviewed survivors and also found Nazi war criminal trial records. Material from the unpublished manuscript of a Mielec concentration camp survivor and from the diary and unpublished manuscript of a Mielec shtetl survivor are included, as is testimony from a Mielec resident who was one of ten women to survive the Sobibór revolt. Research was carried out in Yad Vashem, the United States Holocaust Memorial Museum, the Jewish Historical Research Institute in Warsaw, and on site in Mielec.

Remember the Women Institute gratefully acknowledges grants from the Five Millers Family Foundation, the late Moshe Borger, the Lucius N. Littauer Foundation, and Dr. Nancy Ordway, which made publication of this book possible

Agnieszka Mrozik, who is a native of Mielec, interviewed author Rochelle G. Saidel for the local newspaper, the Rzeszów edition of Gazeta Wyborcza (right). The interview appeared in March 2012, in connection with the 70th anniversary of the March 9, 1942, deportation of the Jewish community of Mielec. The interview took place during a conference on women and the Holocaust, held in Warsaw in November 2011.