Home > Publications > Sexual Violence Against Jewish Women During the Holocaust 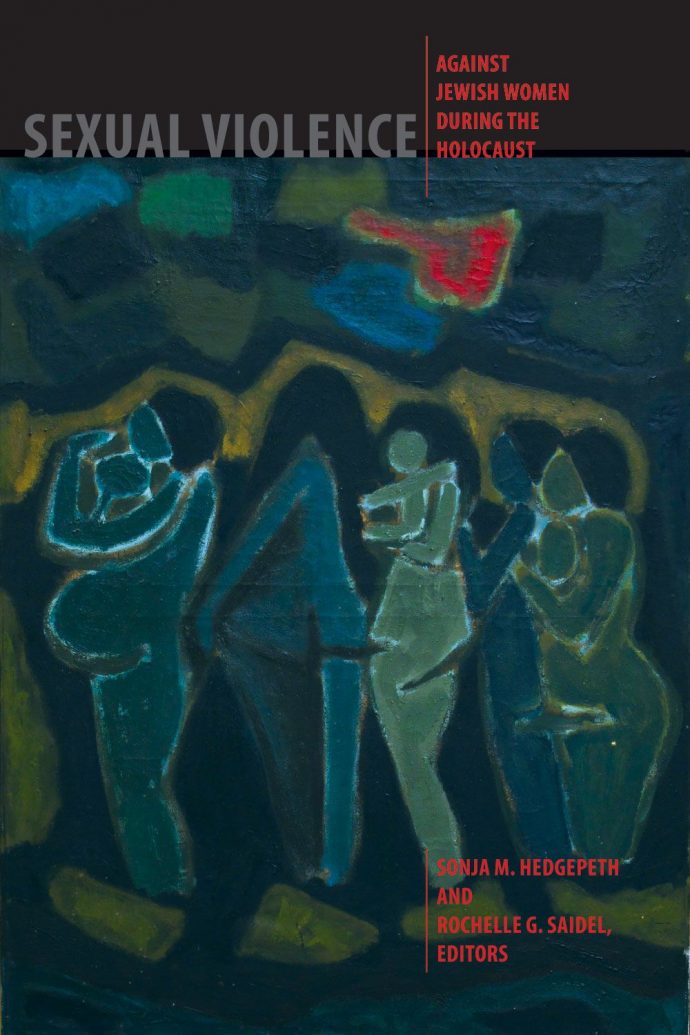 The first book published on this subject

SEXUAL VIOLENCE AGAINST JEWISH WOMEN DURING THE HOLOCAUST was the first book published on this subject.

“The Holocaust horrors suffered by males and females alike have been rightly memorialized in histories and museums, but the sexual violence suffered by females has rarely been recorded. Perhaps we would have been better able to prevent the rapes in the former Yugoslavia and the Congo if we had not had to wait more than sixty years to hear the truths that are anthologized in Sexual Violence against Jewish Women during the Holocaust by Sonja Hedgepeth and Rochelle Saidel. We owe them and the authors they assembled a debt of gratitude for a well-documented warning that sexual violence is a keystone of genocide.”
—Gloria Steinem, Feminist writer and organizer,
co-founder of the Women’s Media Center

“Challenging conventional interpretations by highlighting evidence that has been ignored, downplayed, or even silenced, Sexual Violence against Jewish Women during the Holocaust, a book as courageous as it is sensitive, significantly expands scholarship about the Holocaust’s extremity and intensifies imperatives to resist every kind of sexual abuse.”
—John K. Roth, Edward J. Sexton Professor Emeritus of Philosophy and Founding Director, Center for the Study of the Holocaust, Genocide, and Human Rights, Claremont McKenna College.

“This book touches upon a deeply troubling and too long ignored topic. The Nazis used a wide variety of means to humiliate, degrade, and torture Jews. Rape and sexual abuse were among them. Sadly, it was not only the Nazis and their allies who abused Jewish women. Jews, non-Jewish prisoners, and even liberators did as well. The editors and contributors to this volume deserve great credit for addressing this painful topic.”
—Deborah E. Lipstadt,  Dorot Professor of Modern Jewish and Holocaust Studies, Emory University

Featured in the Hadassah-Brandeis Institute’s Series on Jewish Women, written with the support of Remember the Women Institute, with sixteen chapters by a prestigious interdisciplinary and international group of scholars.

Part II: Rape of Jewish Women
Chapter 5: “Only Pretty Women were Raped:” The Effect of Sexual Violence on Gender Identities in the Concentration Camps
by Monika J. Flaschka
Chapter 6: The Tragic Fate of Ukrainian Jewish Women under Nazi occupation, 1941-1944
by Anatoly Podolsky
Chapter 7: The Rape of Jewish Women During the Holocaust
by Helene J. Sinnreich
Chapter 8: Rape and Sexual Abuse in Hiding
by Zoë Waxman

Part III: Assaults on Motherhood
Chapter 9: Reproduction Under the Swastika: The Other Side of the Glorification of Motherhood
by Helga Amesberger
Chapter 10: Forced Sterilization and Abortion as Sexual Abuse
by Ellen Ben-Sefer

Part V: The Violated Self
Chapter 15: Sexual Abuse of Jewish Women during and after the Holocaust: A Psychological Perspective
by Eva Fogelman
Chapter 16: The Shame Is Always There
by Esther Dror and Ruth Linn

Contributors (background at the time of publication, 2010)
Dr. Helga Amesberger, a social scientist, was a senior researcher at the Institute of Conflict Research in Vienna, with a focus on National Socialist persecution of women and oral history. She is the co-author of Sexualisierte Gewalt in NS-Konzentrationslagern (Sexualized Violence in National Socialist Concentration Camps).
Dr. Ellen Ben-Sefer was a Senior Lecturer at Schoenborn Academic College of Nursing in Tel Aviv, dividing her research time between nursing research and such Holocaust-related issues as children, women, and transit camps. She has also developed a model program in Australia and Israel for teaching nursing students about relevant Holocaust issues.
Kirsty Chatwood, an independent researcher who studies questions of gender, sexuality, rape and “resistance” in the context of genocide, has degrees from University of Alberta and University of Lethbridge in Canada. She was conducting research that includes studying the connections between sexual vulnerability and sex for survival in concentration camps.
Esther Dror was a PhD candidate in the Faculty of Education at University of Haifa, Israel. Her writings include “Unraveling the Curtain of Silence: Leading to Redefinition of the Survival of Women during the Holocaust,” presented at Women and the Holocaust, the Fourth International Conference in Israel in 2007.
Dr. Monika J. Flashka received a PhD in Modern European History from Kent State University. Her dissertation, “Race, Rape and Gender in Nazi-Occupied Territories,” analyzes the intersection of gender and racial ideology in court-martial cases of rape, attempted rape, and child abuse committed by German soldiers and non-German men in the occupied territories.
Dr. Eva Fogelman, a psychologist in private practice in New York City, is Co-Director of Psychotherapy, Generations of the Holocaust and Related Traumas and Child Development Research, Training Institute for Mental Health. The author of Conscience and Courage: Rescuers of Jews During the Holocaust, she wrote and co-produced Breaking the Silence.
Dr. Brigitte Halbmayr, a social scientist and senior researcher at the Institute of Conflict Research, Vienna, focuses on racism, National Socialism, the Holocaust, and gender. She co-authored Das Privileg der Unsichtbarkeit. Rassismus unter dem Blickwinkel von Weißsein und Dominanzkultur (The Privilege of Invisibility. Racism–Being White in Dominant Culture).
Dr. Sonja M. Hedgepeth was and is a full professor in the Department of Foreign Languages and Literatures at Middle Tennessee State University. In addition to German, she has taught extensively about the Holocaust, women’s issues, and world literature. She has published a book on Else Lasker-Schüler, as well as co-edited a book on this famous German-Jewish writer.
Dr. Yvonne Kozlovsky-Golan taught history and cinema at University of Haifa’s Department of Cinema and Television, as well as Sapir College of the Negev and Kibbutzim College in Israel. She researches the cinema’s influence on viewers’ knowledge of history. She is the author of “Until you are Dead”: The Death Penalty in the USA: History, Law, and Cinema.
Dr. S. Lillian Kremer, University Distinguished Professor, Emerita, Kansas State University, of blessed memory, was the author of Witness Through the Imagination: The Holocaust in Jewish American Literature and Women’s Holocaust Writing: Memory and Imagination, the editor of Holocaust Literature: An Encyclopedia of Writers and Their Work, and the author of many critical essays.
Nomi Levenkron, an Israeli attorney, headed the anti-trafficking department at the Hotline for Migrant Workers in Israel. She was Professional Director of “Matters” – The Law and Society Clinical Center, College of Management, Academic Studies, and Director of the Human Rights Clinic. She also taught courses about prostitution and trafficking at Tel Aviv University.
Prof. Ruth Linn, a former Dean of the Faculty of Education at University of Haifa, Israel, studies moral psychology and focuses on issues associated with resistance to authority. Among her four books is one about the suppressed story of Auschwitz escapees. She has been a visiting scholar at Harvard University, University of Maryland, and University of British Columbia.
Dr. Anatoly Podolsky, a historian, was the Director of the Ukrainian Center for Holocaust Studies in Kiev, Ukraine, and a senior researcher at the Institute of Political and Ethnic Studies of the National Academy of Sciences of Ukraine. He is the author of “A Reluctant look back: Jewry and the Holocaust in Ukraine,” as well as many published articles.
Dr. Rochelle G. Saidel, a political scientist, was and is Founding Director of Remember the Women Institute in New York City, and was a senior researcher at the Center for the Study of Women and Gender, University of São Paulo, Brazil. She is the author of The Jewish Women of Ravensbrück Concentration Camp and editor of Fiorello’s Sister: Gemma La Guardia Gluck’s Story.
Dr. Helene Sinnreich was the Director of the Center for Judaic and Holocaust Studies and Associate Professor of History at Youngstown State University. She was editor-in-chief of the Journal of Jewish Identities and Executive Director of the Ohio Council for Holocaust Education. Her research focuses on victim experience during the Holocaust.
Dr. Miriam Sivan, originally from New York City, taught at University of Haifa and at the Emek Yizrael College. Her book, Belonging Too Well: Portraits of Identity in Cynthia Ozick’s Fiction, was published in 2009. Her novella, City of Refuge, was adapted for the stage at a theater conference in London in 2007. Her newer novel is Make  it Concrete.
Dr. Robert Sommer received his PhD from the Institute of Cultural Studies at Humboldt University in Berlin in 2009. In 2006-2009, he organized an international conference, “Forced Prostitution and War in the 20th and the Beginning of the 21st Century,” at the Ravensbrück Memorial, and also served as scientific project supervisor there for an exhibit on camp brothels.
Dr. Zoë Waxman was a Research Fellow in History at Royal Holloway, University of London. She is the author of Writing the Holocaust: Identity, Testimony, Representation (Oxford University Press, 2006) and articles on the Holocaust and women’s Holocaust experiences.