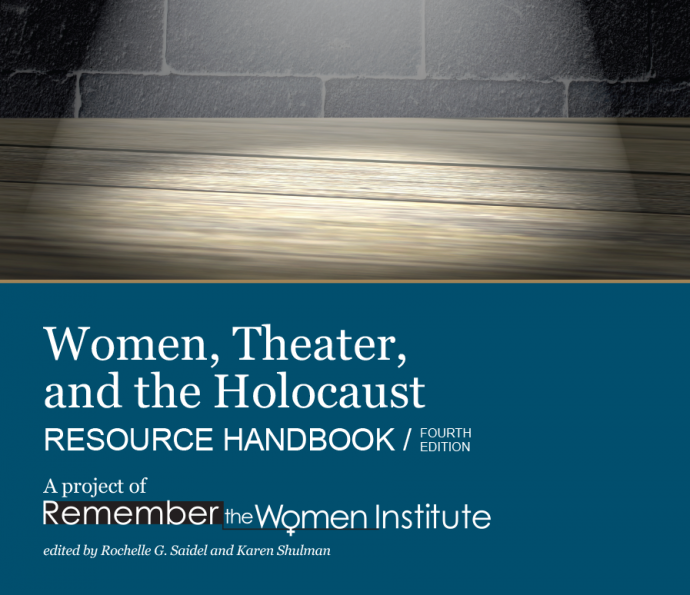 An on-line project, ongoing for years, with a new edition forthcoming

Remember the Women Institute has published four editions of our on-line Women, Theater and the Holocaust Resource Handbook, and launched them at theatrical events.

First published in 2015, the fourth 2019 edition is dedicated to the memory of acclaimed Israeli novelist and playwright Nava Semel, a beloved member of our Advisory Board. This 150-page edition, as well as earlier editions, is available as a free downloadable PDF. Following an Introduction by Dr. Rochelle G. Saidel, Section 1 is an annotated bibliography with three parts: Part 1 lists plays about women and the Holocaust; Part 2 lists plays about the Holocaust by women; and Part 3 lists books about women, theater, and the Holocaust. The listings have numerous additional and updated entries. Section 2 of this resource handbook offers six personal essays, one of them new, describing the creation and staging of theatrical works about women and the Holocaust. In alphabetical order, they are by Dr. Meghan Brodie, Cynthia L. Cooper, Dr. Patrick Henry, Susan B. Katz, Dr. Rochelle G. Saidel, and Dr. Alice Shalvi. Dr. Meghan Brodie, Assistant Professor of Theater, Ursinus College, describes her experience working with her students at the University of Southern Maine on In the Underworld, a play about Ravensbrück women’s concentration camp translated from camp political prisoner Germaine Tillion’s Le Verfügbar aux Enfers. Cynthia L. Cooper details how she became engaged with the story of Gisa Peiper, a young Jewish member of the resistance in Hamburg, and how she carried out research on site in Hamburg and elsewhere to create her play, Silence Not, A Love Story. Dr. Patrick Henry tells us about the play he wrote based on political prisoner Charlotte Delbo’s Auschwitz and After. Susan B. Katz describes writing her play Courage Untold, about the women who took part in the October 1944 prisoners’ uprising in Auschwitz-Birkenau. Dr. Rochelle G. Saidel writes a tribute to Nava Semel and her work. Dr. Alice Shalvi, an Israel Prize awardee for Lifetime Achievement, writes about the initiation and implementation of Refidim Junction, a musical theater piece that originated with the discovery of letters written by her mother in 1930s Germany. Section 3 offers teachers an outline frame, created by Karen Shulman, educational consultant for Remember the Women Institute, for a study plan that uses theater to teach about women in the Holocaust.

Theater has the power to make history more alive for viewers, whether it is strictly factual or evokes the spirit of what actually transpired. This resource handbook, with plays by and about women that were written and presented from the time of the Holocaust until today, helps us to better understand the experiences that women suffered as women.

Our resource handbook project also cooperates with two projects that deal with the Holocaust and theater in general: the Holocaust Theater Catalog of the National Jewish Theater Foundation in the United States and All About Jewish Theatre, a virtual encyclopedia in Israel.

Remember the Women Institute is grateful to everyone who has contributed to this resource handbook, and we especially thank Dr. Meghan Brodie and Cynthia L. Cooper, who have also worked with us throughout the years to bring us premiere readings of their plays performed by professional actors and students.

We welcome reader recommendations for additions to the bibliographies, as well as other essays and lesson plans about women, theater, and the Holocaust. A new updated edition is forthcoming. Suggestions can be sent to [email protected].